So we did our annual trip to the fair to indulge in weird food, livestock, funky exhibits, and sunshine.

This year, it was a crap shoot for I’ve come to realize I can’t handle greasy food, and the exhibits were sub par.

The theme was “how the west was fun” which I dig, it’s an everyday thing in our lives in northern San Diego. I did, however, expect a little more in terms of western exhibitions and thematic presentation. It seemed more like an opportunity to poke fun at western and cowboy culture. Hokey clowns, straw wide brims, banjos playing high-paced “cotton eyed Joe” fashioned tunes, poorly thought out activities like repurposing t shirts and photo ops with plastic horses and jail cells, and overly greasy gimmicky food like fried octopus with a cowboy hat and an ice cream sandwich on a donut with fried chicken entirely rolled in fruity pebbles. Not to mention the GIANT display about Native American culture shaming western culture(which I get, I took two years of Native American studies in my undergrad degree and I’ve got Cherokee and Chickasaw cranking through my blood) which in my opinion was overboard and too focused on sports teams as the cause of the problem. Basically, a big fat ode to why Europeans hate Americans. The concept was good, just very poorly executed and slightly offensive.

*As a disclaimer, I’m not easily offended, nor do I give two birds about political correctness. I’m a ginger, so a walking joke target for many. So take anything I say personally. Just honestly.

Anyways, beside the hokum of the fair this year, 4H and FFA were super successful and the auction proved to be a hell of a learning experience for the new kiddos of that are the future. I’m super pumped that I was able to congratulate two of my favorite kiddos on the sales of their lambs. Together they brought in roughly 4 grand because market value was stellar this year. I’ve watched this two grow up and am super proud of their accomplishments!

So for the food..

The grilled artichoke sandwich never fails, so that was a must, accompanied by the fried artichokes which were just ridiculous.

I can’t wait to put together a baked version of these bad boys to cut out the grease component.. be expecting it on my food blog later this month ( HouseofCarbz.wordpress.com ).

Next up was the deep fried bayou burger.. it’s not as cardiac arrest inducing as it sounds. They flash fry a beef patty, top it with pulled pork and a dollop of coleslaw on a sesame seed bun. It was actually super good and I didn’t want to curl up in the fetal position and die afterwards. 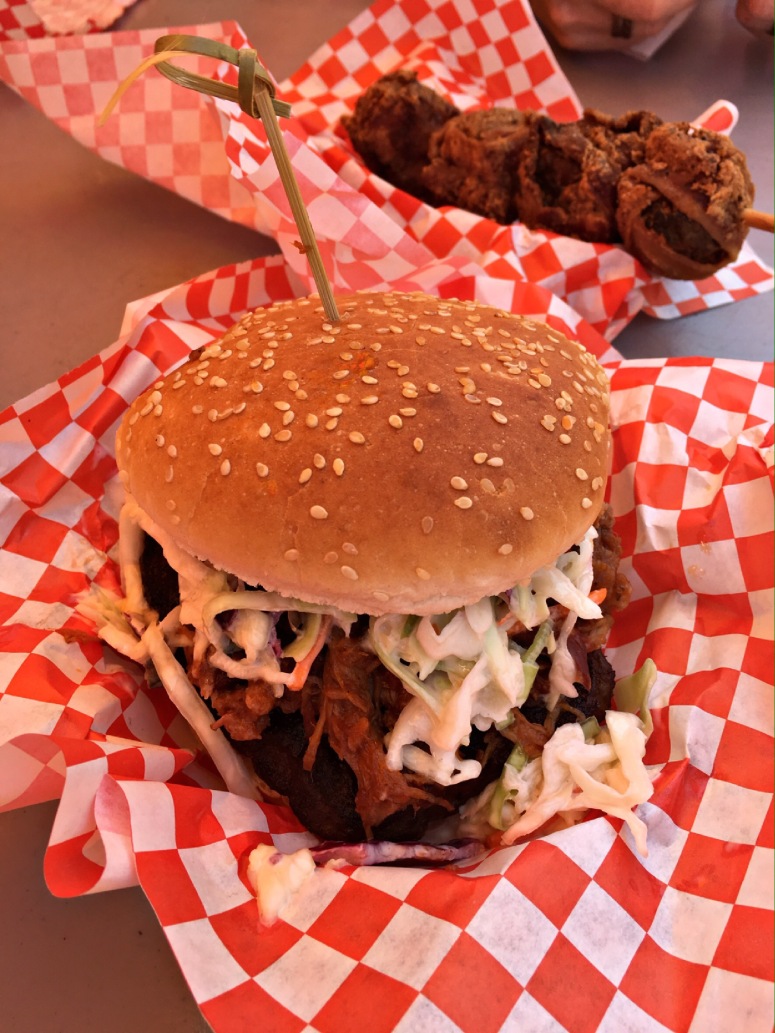 However, I made the mistake of trying the bacon wrapped pickle and I DEFINETLY wanted to die after.. then be resurrected just to die again. It was a poor decision. The bacon was overly crispy and completely dry. The pickle was what nightmare are made of. They quarter a whole dill pickle and individually wrap each action, but it subsequently burns the outside of the pickle and creates a boiling hot funky ass pickle lava in the center. If it sounds disgusting, it’s worse. I couldn’t even finish it. Coming from a pickle fanatic, I’d never been so sad for an innocent little cucumber. NEVER AGAIN. 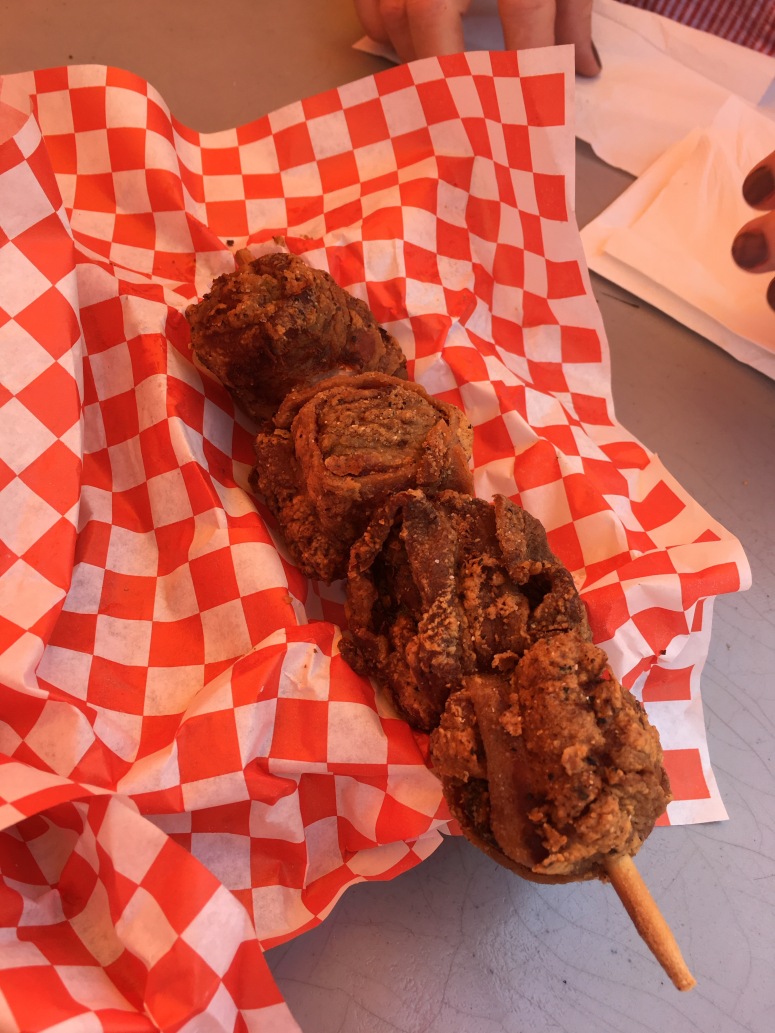 All in all, I’m glad it’s a wrap and the fair is done for another year. If I could sum up the 2017 fair experience, in one image, it’s from this detailed sculpture from the arts exhibit.. 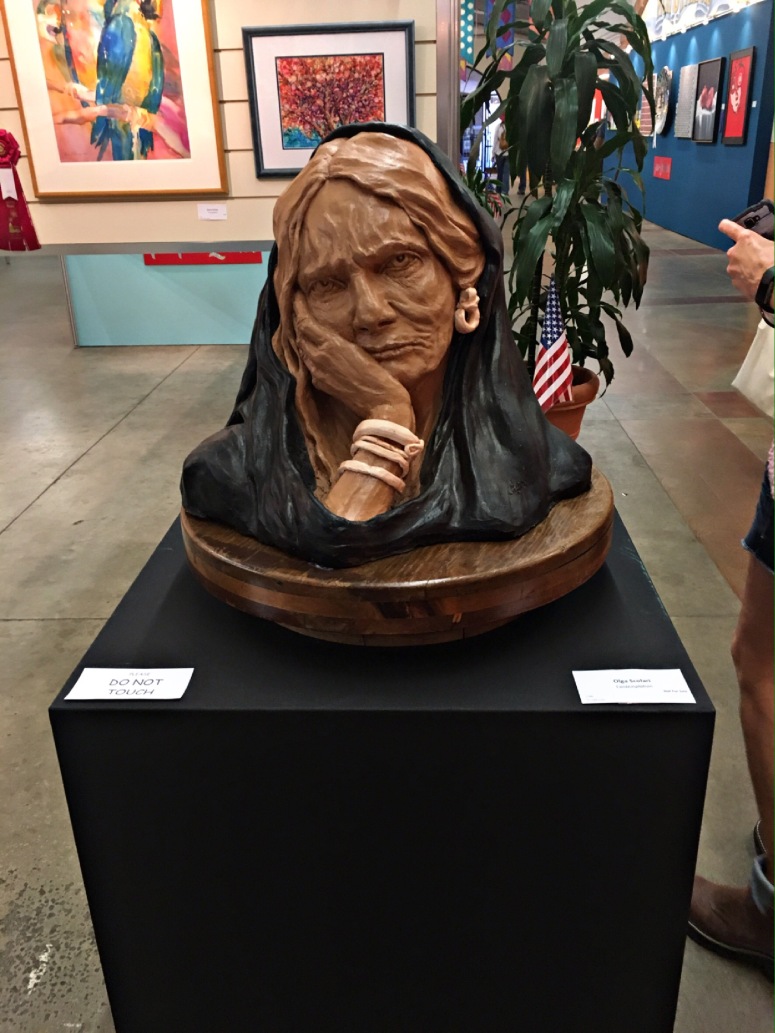